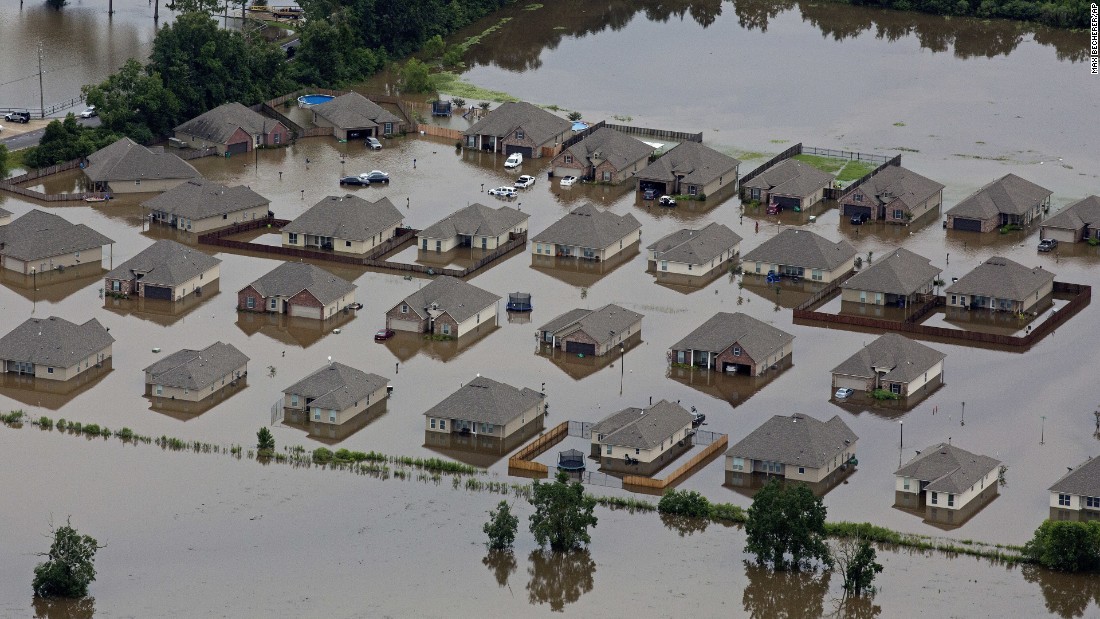 FORT MYERS, Fla. — Anita Dennis talked on the phone with her homeowner’s insurance company, her furrowed brow expressing more than words could say.

The 72-year-old widow carried flood insurance on her home years ago, then let it lapse after learning her neighborhood in The Villas in south Fort Myers was only expected to flood every 100 years.

The house, built in 1973, has flooded twice in the past month.

It is in Storm Surge Zone B, property records show, which indicates it is outside the Federal Emergency Management Agency’s “Special Flood Hazard Area.” Still, the zone has a moderate flood hazard.

Dennis shared her plight Monday, from the sweltering sunroom of her gutted, still-powerless home.

“I never expected this to happen,” she said. “I’m here 25 years. I’ve never had water like this. Never, never, never.”

“I’ve lost flooring. I’m going to lose drywall. There is mold,” she said. “I don’t know if I can save my kitchen cupboards. It was a combination of things that led to a worst-case scenario.”

That scenario has driven her into a cousin’s nearby condo. Her long-term future is uncertain, along with thousands of other Floridians whose homes have been ravaged by floodwaters brought on by the hurricane.

Robert Hunter, director of insurance for the Consumer Federation of America, has more than 50 years of experience in the industry. In the 1970s, he ran the National Flood Insurance Program, which provides flood insurance to homeowners, renters and business owners.

Hunter expressed concern for financially strapped homeowners who live in more inland communities such as Lehigh Acres who did not carry flood insurance and who may already have been just scraping by.

“Being poor, some people have high mortgages with little equity,” he said. “What happens next? It all depends on how damaged the house is, how much money the family has, how much equity in the home they have in terms of what they do.”

Hunter admonished FEMA for doing a poor job of ensuring those homeowners mandated to carry flood insurance are doing so.

“FEMA has done a terrible job of monitoring the banks to make sure they have flood insurance,” he said. “Something is really, really wrong.”

Property owners, he said, make two fundamental errors in thinking when it comes to flood insurance:

No. 1: “It won’t happen to me, I’m further away from the water. They assume it won’t happen to them because they haven’t seen water anywhere near where they live and they’ve been there for 30 years.”

No. 2: “Since I’m further away from the water, if it happens to me it’s going to be so bad the government is going to come in and give me disaster relief. It might be a small grant, but the bulk of disaster relief is a loan. Those two things together really impact people.”

Despite back-to-back hurricanes hammering the United States, Hunter said the homeowner's insurance industry should be fine.

“There’s some reports they could raise rates, but that’s crazy,” he said. “The models to set the rates already contain in them storms in the averages that are like Irma and Harvey. They shouldn’t have any impact on the pricing. There’s no reason for them to raise rates or cancel people’s insurance.”

An Associated Press analysis in early September — before Irma battered Florida  — shows a steep drop in flood insurance policies across the state.

In just five years, the number of federal flood insurance policies in Florida has fallen by 15%, according to FEMA data.

Property owners in Florida still buy far more federal flood insurance than any other state — 1.7 million policies, covering about $42 billion in assets — but most residents in hazard zones are badly exposed.

Florida has roughly 2.5 million homes in hazard zones, more than three times that of any other state, FEMA estimates. Yet, across Florida's 38 coastal counties, just 42% of these homes are covered.

Florida's overall flood insurance rate for hazard-zone homes is 41%. Fannie Mae ostensibly requires mortgage lenders to make sure property owners buy this insurance to qualify for federally backed loans, and yet in 59% of the cases, that insurance isn't being paid for.

The declines in coverage started after Congress approved a price hike in 2012, making policies more expensive. Maps of some high-risk areas were redrawn, removing a requirement that these homeowners get flood insurance.

About seven of 10 homeowners have federally backed mortgages, and if they live in a high-risk area, they still are required to have flood insurance. But many let their policies slip without the lender noticing; loans also get sold and repackaged, paperwork gets lost and new lenders don't follow up.

FEMA, which is ultimately responsible for enforcing flood insurance requirements, did not respond to an email seeking comment from its Washington office. The private flood insurance market is small — only about 20,000 policies in Florida.

John Dickson, a flood insurance expert based in Montana, said a common scenario has been playing out after hurricanes Irma and Harvey.

“People that need flood insurance are not the ones who carry it,” he said. “You have too many people exposed to this. We as an industry and a community need to do more.”

Homeowners face a big misconception when interpreting the flood risk. For example, FEMA defines a “non-special flood hazard area” as an area that is in a “moderate-to-low risk flood zone.”

“The term ‘lower risk’ has been translated to ‘no risk’ and as a result there’s an imaginary line that this is where the flooding stops, so I don’t need flood insurance,” he said. “The water doesn’t know where those lines are. It goes until it stops moving. Nearly one in four flood claims occur in these areas.”

In many cases, homeowners who live in more inland areas are limited financially. Such status makes it even more important to carry flood insurance, Dickson said.

“If I have limited resources and I have to be extremely careful with the money I do have, do I have the wherewithal to withstand an Irma if it makes my house uninhabitable?” he said. “If I don’t have that financial cushion, this is what insurance is for. Homeowners need to work with their agents to find out what their options are.”

All hope is not lost for many people facing losses not covered by insurance. Property owners may be eligible for FEMA disaster assistance that could total $5,000 to $15,000 Dickson said. Other options for business owners, homeowners and renters include getting a loan — which require carrying flood insurance — through the U.S. Small Business Administration.

While it may be too late to help some homeowners impacted by Irma, Dickson hopes such a disaster will prompt consumers to make adjustments to protect from the hurricanes to come.

“Property owners are very interested in insurance issues when the water is rising after a hurricane,” he said. “What every person in Florida should be asking is, ‘What do I need to do to protect the treasures of my life?’ Think about that when the sun is shining, not when water is 2 feet deep in the living room.”

Dennis, the south Fort Myers homeowner, doesn’t have a sense how expensive it will be to repair the house as she weighs how much she can spend on a fixed income. Her windstorm policy will not cover most of the damage, she has been told, since flooding is the culprit for the vast majority of her issues.

In the meantime, St. Michael Lutheran Church has been a big help.

Arturo and Ruth Maita from her church worked to peel off the popcorn ceiling Monday as Dennis pointed out damage.

“I’m too old now,” she said. “I just can’t do it all. These are the times when you need that support.”

While roof damage appeared to be minor, the ceiling may be bowing slightly. Redoing it is a measure Dennis felt necessary as she prepares the property for whatever comes next.

“I own the property, but I have to restore it if I’m going to sell it,” she said. “I don’t have a lot of options.”